Walt Disney’s Final Dream: Living in Utopia (the EPCOT that never came to be Pt. 2)

A Tribute to 95 Years of the Walt Disney Company

The one and only Walt Disney stands in front of a giant map covered in a circular design, a broad smile forms on his face as he gushes with excitement over his newest and greatest dream. Once more, he addresses the audience as if they were an old friend.

“EPCOT will take its cues from the new ideas and new technologies that are now emerging from the creative centers of American industry. It will be a community of tomorrow that will never be completed but will always be introducing, and testing, and demonstrating new materials and new systems. And EPCOT will always be a showcase to the world for the ingenuity of American free enterprise.”

He wanders back to the chair that has been prepared for him by his staff. In hindsight, one might realize that Walt’s health had already been waning as he grasps for the chair and sits down heavily; but at that time, very few people knew how sick he really was. Regardless of how sick Mr. Disney was, he always had time to share his dreams with the world, and that fact never changed. He continued;

“I don’t believe there’s a challenge anywhere in the world that’s more important to people everywhere than finding solutions to the problems of our cities. But where do we begin? How do we start answering this great challenge? Well, we’re convinced that we must start with the public need. And the need is not just procuring the old ills of old cities. We think the need is for starting from scratch on virgin land and building a special kind of new community.”

You can see it in his eyes, the joy and the eagerness to make EPCOT become a reality, and although Walt passed away before it could be realized, the plans still exist. We can still see what he had planned for the culture of his final dream.

Every resident of EPCOT would be required to work on Disney property, at either the theme park, or somewhere in the city itself.  There would be absolutely no difference between the living conditions of apartments and homes, save for the fact that the homes would be reserved for workers with families. Both would have access to the same amenities, and they would both have the same high-quality city transportation.

Speaking of transportation, EPCOT would have had the most innovative transportation system in the western hemisphere. Everything would be connected by the highly efficient, quiet, and clean Monorail system. The line would start at the Transportation Hub located right outside the city airport, travel through all of the outlying areas of EPCOT, through the city center, all away around the surrounding land, and then circle back to the Transportation Hub. All areas of EPCOT would be easily accessible and connected by Monorail. But it doesn’t even stop there!

Residents wouldn’t even have to walk to the monorail if they didn’t want to. Each house would be located only a few yards from the unobtrusive PeopleMover line, a system of continuous carriages chained together and looping on a track without stopping. It was specifically designed by Imagineers to eliminate noise and traffic. It’s a similar concept to the conveyor belt walkways you find at the airport that never step moving, allowing passengers to simply step on at their leisure. Both the Monorail and the PeopleMover would be utilized at a much smaller scale in the Walt Disney World that exists today.

The transportation system was supposed to be so comprehensive as to eliminate the need for automobiles entirely! In fact, you would never see one in EPCOT; as the cars of tourists, and even the trucks used for transporting goods into EPCOT would only be utilized underground! That’s right, EPCOT was supposed to be built on the second level of the city! To keep pedestrians safe, and to keep “backstage” out of guest’s view, all outside transportation would take place under the very streets of EPCOT’s homes!

As Walt Disney stated in that fateful EPCOT film, his city was meant to be at the cutting edge of technology; testing new ideas in a safe and friendly environment. To this end, Walt intended to partner with the world’s leading industries to constantly update the homes and apartments of EPCOT’s residents. They would always have first access to the latest home appliances and amenities, for no additional charge! It was quite possible for a resident to come home from work to find a brand-new stove installed in their house.

EPCOT would be a symbiotic relationship between the Disney Company, other American corporations, and the residents that lived there. In return for helping fund the building of the city, leaders of industry would receive Disney’s financial help and a free platform to test their newest products on the open market; all for a reduced manufacturing cost. The new products would then be tested by the very people who helped make them, EPCOT’s own residents; allowing the first users of a new product to be the ones that were most deserving of it. All these elements would work together to form a sort of BETA testing ground to find out what would or would not work for the rest of the world. 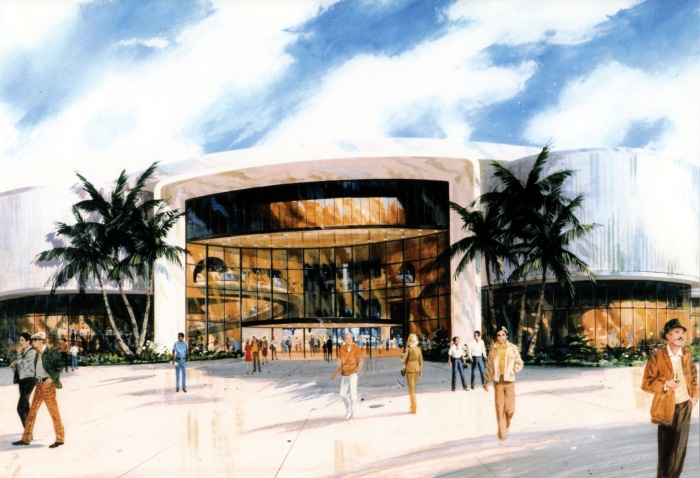 Everything would be connected, not being able to survive apart, but functioning strongly as a unit. Everyone in EPCOT would belong there. It may not have been a perfect utopia, but at least it would be relatively comfortable and efficient for everyone! No one would be in EPCOT unless they were needed.

So, it’s sad to see that none of this came to be after Walt’s untimely passing. It would have been amazing to see whether EPCOT could be accomplished the way it was intended. For now, the original EPCOT is a simply a dream that we can be inspired by. If anybody could have done it, it would have been Walt Disney!

But as most people know, a good idea never dies at Disney; it waits for an opportunity to be revisited and reimagined in new ways. So, what happened to the ideas of EPCOT? Next week we tackle what became of this idea and how elements from Walt’s City of Tomorrow can be glimpsed, even if just for a moment, in what became known as Walt Disney World! (NEXT PAGE>>) (<<PREVIOUS PAGE)

C.Z. Anderson A lover of all things Disney, comics, and cinema; C.Z. Anderson is a Arizona-based professional storyteller, actor, illustrator, author, and lead writer of Disney Magic Fanatic. With an imagination that just won't shut up, he releases his seemingly endless and bizarre creativity through his various works in media. A simple-minded individual with a free spirit and love of literature, C.Z. Anderson just simply wants to bring joy to the world. Whether he accomplishes this or not, he feels that he must keep working towards it or his head might burst from trying to keep it inside!
Published April 11, 2018November 28, 2019

2 thoughts on “Walt Disney’s Final Dream: Living in Utopia (the EPCOT that never came to be Pt. 2)”